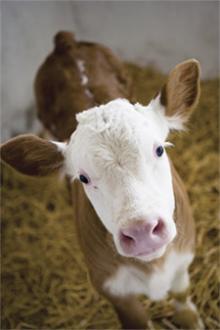 It's amazing how quickly Reiki energy can work when there is a clear intention. In my case, it was channeling my love for animals into practicing animal Reiki. During my Level I and II training, I happened to read an article by Kathleen Prasad in the Spring 2009 issue of Reiki News Magazine: "Five Reiki Lessons I Learned from My Animal Teachers." It was a tutorial on best practices for animal Reiki. I was so inspired by the article and wondered when I'd have a chance to try Kathleen's approach.

I didn't have to wait long. Even my Master Teacher Eleonore Khoury remarked, "That was fast!" A few weeks after my Reiki training, an e-mail popped into my inbox from the Gentle Barn Foundation, (www.gentlebarn.org), a local sanctuary for abused animals. Six baby calves had just been rescued from veal crates and the slaughterhouse. The Gentle Barn needed volunteers to care for them around the clock. Could I spare some time?

Amazed and thrilled at the opportunity, I signed up for a 7 p.m. to 3 a.m. shift on the weekend. During the hour and a half drive to Santa Clarita, I kept reminding myself to lose any attachment to the outcome and just concentrate on creating a loving space for healing.

When I arrived at the quarantined barn, the calves were outside eating alfalfa. For baby calves, they looked pretty big to a city girl like me—they came up to my waist and probably weighed from 150 to 200 pounds, or maybe less because they were so malnourished. Jutting hipbones and splotched sores on their coats were evidence of their abuse. One calf, named Chi, had recently died. Conjunctivitis (pinkeye) had left another one blind and given the rest cloudy eyes, which constantly watered, leaving wet streaks on their faces. Pneumonia made breathing labored and they coughed and heaved in an effort to clear the fluid in their lungs.

Jay Weiner, who runs the Gentle Barn with founder Ellie Laks, explained that in addition to the intensive veterinary care they were receiving, the baby cows needed to be bottle-fed twice a day, washed daily to bring down their fever, and blanketed at night in the barn to keep them warm. My job was to give the nightly feeding, tuck them in, and keep the barn clean. "And be sure to give them lots and lots of TLC."

I noticed one of the calves was very friendly and really enjoyed being petted. I was told, "Oh, that's Forgiveness. He's a great guy." Star, Crystal and Courage were shy and blind Faith just bumped into everything. Once fed, the five settled into a routine and began lying down on the barn floor. Forgiveness bedded down next to my chair. I covered each one with a blanket and started a Reiki meditation, hoping to fill the barn up with healing energy to ease their physical and emotional pain. I could hear them all breathing and coughing as the cold night deepened into stillness broken by an occasional car on the road.

Around 1:30 a.m., Jay checked in, and we spread a fresh, deep layer of sawdust on the floor and replenished the water. He took a few temperatures and uncovered one of the calves, who had a high fever. With the pitchfork and wheelbarrow, I cleaned up the "cow pies" and Jay left.

It happened just after I sat down again to meditate. With all the activity, the calves were up again and walking around the barn. Faith collided with one of them, who lost his balance, fell down, rolled over and just lay there on his side, making no effort to get up. A strong intuitive knowing told me that if I didn't get him back on his feet right away, he could suffocate from all the fluid in his lungs.

I pulled his head up, held it, brushed the sawdust out of his nose and mouth, and kept saying, "Get up, get up!" I continued pushing against his side until he finally got up on his feet. I brushed him off, blotted his weeping eyes, stroked his coat and told him he was going to be all right. After that scare, I watched Faith closely.

When they settled down again, I went back to my Reiki meditation. The calf who had fallen came over and stood right in front of my chair for the longest time. Was he ever going to lay down? Yes, he did, right in front of me, and rested the side of his head against my knee. Even a beginner knows this is an invitation to hands-on Reiki! Filled with wonder and joy, I placed my hands on his head and was overcome with a rush of love and gratitude for the opportunity to give the healing blessings of Reiki to this sweet, innocent spirit who had suffered so much.

He kept leaning against me, falling into a peaceful "Reiki nap," until around 2:45 a.m. when I heard the arrival of the volunteer who'd come to relieve me. It was hard leaving him and the others as well, so I sealed the Reiki treatment and vowed to come back.

The other two visits were not nearly as eventful. These babies were clearly getting better! By my third visit, the vet was able to stop their meds and pretty soon they would be allowed in with the other 12 rescued cows. One time I forgot to close the barn gate when I went to get food. Big mistake. They all followed me out to the trailer and one calf stuck his head in the manna bag, so I had to pull him out and maneuver around the other four who were squeezing me in their eagerness to get to the food. Next feeding, I kept the barn gate shut, so they all clustered around it and mooed at me. I'm used to begging behavior with my cats, but baby cows were a whole new experience!

The deep gratitude I feel to Spirit in leading me to Reiki, to my Teacher Eleonore and the Gentle Barn is so overwhelming, it's almost impossible to express. To me, animals are the most innocent, unconditionally loving and perceptive beings on the planet. They teach us, suffer for us, and show us that love can triumph over anything. Reiki is the door to what the Greeks call Agape, the divine and purest expression of love. To be able to give that kind of love to the animals who are sharing this journey with us is one of the greatest blessings of my life.

This article appears in the Fall 2009 issue of the Reiki News Magazine.