I'm a psychotherapist and Reiki master. I have found Reiki to be a useful adjunct to my counseling practice. It has improved the quality of my work and decreased the number of sessions necessary to produce significant healing and recovery for many of my clients.

Because of professional and legal constraints, I do not use hands-on Reiki in my counseling practice. However, Reiki aura clearing is a technique I can use, as it is done without touching the client. Aura clearing (also called "psychic surgery," but not the same as the Filipino version) is a technique I have found useful in both my counseling and Reiki practices. It is very powerful and often creates dramatic results. 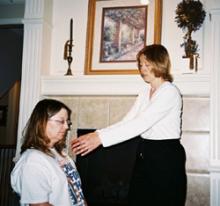 Pulling negative energy out.
This technique was developed at The International Center for Reiki Training and involves the combined use of Reiki, NLP (Neuro-Linguistic Programming), and a shamanic technique. The practitioner gains the help of the client by asking them to identify, in a metaphorical way, where their psychic pain lies in their physical body. Using this technique, the client usually becomes aware of an energy shape with color(s), texture, weight, and often, sound. To prepare for clearing, the practitioner does a number of things, including saying a prayer to call on spiritual help and extending their Reiki fingers. Once preparations are complete, the practitioner proceeds to pull out the energy shape using repeated hand motions combined with a breathing technique. 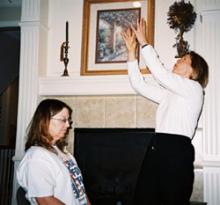 Sending it up to the light.
Aura clearing can quickly and easily release energetic blockages from all levels of the energy field, working more quickly than Reiki alone. These blocked patterns can be recent, from childhood, or even from a past life.

Some of their stories follow. (All the names and identifying information have been changed to protect the confidentiality of my clients.)

Rita, another counseling client, suffered from the trauma of being raped. At the time of the assault, she had been drinking and taking several medications for various physical problems. Because of the drugs, she didn't know exactly what happened, but she did know that she had been raped. A police exam confirmed this.

Rita was obviously traumatized when she arrived. She told me the man had held her hands down, but she really didn't want to discuss the experience further. Rita didn't have the words to describe what happened to her energetically. She just had a sense that his energy was still on her body, and she felt dirty. From an energetic standpoint, I felt that when the rape occurred, the rapist left pieces of his aura or energy in her energy field, leaving Rita to feel continually traumatized by the rape. She indicated that she wanted to release the feelings of contamination. This indicated to me that aura clearing would be an ideal technique for her situation.

As I scanned her body, I could feel her attacker's energy in several places, including on her hands. Blocks feel very different depending on how long they have been there, how much trauma they represent, and whether or not a spirit is attached. This energy felt very dark and repulsive to me, so I could tell that something awful had happened.

In the opening prayers prior to commencing aura clearing, I asked Archangel Michael to help along with the ascended Reiki masters. In my experience, Archangel Michael is able to help release attachments to one's energy field. I protected myself with the power symbol over all my chakras. Then I began pulling the negative energy from Rita in all the places where we felt blockages. I discovered that she also had blocks in her head and heart from the trauma of the experience. After about twenty minutes of aura clearing, I no longer felt any blocks remaining, and she reported that she felt released from the dirty energy.

I then proceeded to hold my hands over her body and give her Reiki for another twenty minutes to fill her energy field with positive energy. Rita commented that she felt she could go on with healing now that "his energy" was gone from her body. Previously, she felt repulsed by her body and the energetic remnants he had left.

After the aura clearing, Rita felt she could start to move forward with her life. Additionally, she no longer felt the need to talk through this event in counseling and was able to return to the other things we had been addressing. This is remarkable progress because a rape is often an event that impacts a person for many years and in many ways.

This is just part of the article which appeared in the Summer 2003 issue of Reiki News Magazine.