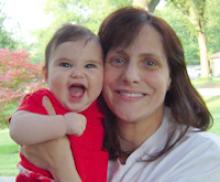 Mia Tennenbaum and daughter.
It was in late January 2003 when I had my first experience with Reiki. For several months prior, I had repeatedly come across materials about Reiki and had felt that "cosmic nudge" that often guides us in the directions we are meant to go. In this case, while on vacation, I met a woman who was an intuitive Reiki Master. I smiled keenly when we met, knowing that an immeasurable number of events had aligned in order to bring us together. After she described for me what the session would be like, I got comfortable and we began. Before I knew it, the session was over, and I was so relaxed that it was difficult to call my body back into action. While I propped myself up on some pillows, drank water, and got grounded, she sat with me to provide her feedback from the session-this being her particular gift. She told me about the various pieces of information that she gathered during the session, and she was correct in telling me about various friends and relatives, most specifically my two sons, who were six and four years old at the time. She then asked, "And what is your daughter's name?"

At that time, my sons were my only children, so I replied that I did not have a daughter. She was struggling with this and was adamantly claiming that she was clearly picking up on a mother/daughter bond-a very strong one. After much hesitation for fear of actually uttering the words aloud, I finally looked at her and asked, "Could you be picking up on my little girl waiting to be conceived?" She looked at me with a huge smile and said, "Yes! She is waiting for you!" Since the previous August, I had felt this child's presence but would periodically question my sanity! To have this Reiki Master confirm my suspicion was remarkable. In April of 2003, I learned that I was pregnant...

...It was around this same time that I had become determined to birth this baby without the use of an epidural. I simply did not want to risk the significant back trouble that I had gone through in the past. The sixth, seventh, and eight months of pregnancy went by, and I continued to give myself Reiki. My energy level and spirits were high as I approached my ninth month, and I decided that, in order to prepare for childbirth, I would participate in the Level II Reiki Attunement. At the start of my ninth month, I did just that! Not only was I interested in intensifying the Reiki energy, but I was also very curious about distance healing. By this time, I was very large and limited in my movement. It was virtually impossible for me to do the hand placements for the self-healing and so, instead, I did distance healing on myself. While lying in bed, I would envision myself and my baby floating in a bubble of warm, white light. I would carry these thoughts until I drifted off to sleep-it was peaceful.

With the assistance of my wonderful doula (birthing support person), Sharon Dreifuss, I spent the last two weeks of pregnancy mentally preparing for what would end up being a defining moment in my life. On the morning of January 25, 2004 (my due date, no less!), our journey began. My husband took me to Evanston Hospital, where, for the next seven hours, labor slowly built. As the nurses periodically monitored the baby, they repeatedly commented that they had never seen a baby so happy during labor. Much to my surprise, my laboring position of choice was a meditation pose with my legs crossed and back supported by pillows. I used Reiki hand placement primarily on and around my large belly in efforts to comfort the baby through this strenuous process.

Meditation coupled with Reiki energy took me through contraction after contraction. I was in complete awe of what my body was doing-as if something ancient and sacred had been awakened within me and was sweeping me along with the process. At one pivotal point, as contractions intensified and I was deep in mediation, I felt my crown chakra open fully as warm energy surged through my body, hugging every cell of my being. The feeling was so overwhelming that I began to weep. Those in the room thought I was crying because of the pain and were trying to comfort me. What I could not verbalize at the time was that I was overtaken by the pure beauty of what was happening both in and around me. In that one moment, time ceased to exist and I had an instant understanding of the magnitude of God's blessings.

Shortly thereafter, with much work and effort, my baby was thrust into this world and with this became my confirmation of the powers of intuition and the spiritual realm-I held on my chest the beautiful miracle of a baby girl. My husband was glowing with excitement, and everyone in the room was filled with a sense of awe at witnessing and experiencing this labor and birth. It was better than anything I ever imagined it could be.

This is an excerpt from an article in the Fall 2004 issue of Reiki News Magazine.