The World Peace Grid at The South Pole

The World Peace Grid at The South Pole

In May, 1997, I placed a specially prepared Reiki Grid I  call the World Peace Crystal Grid at the magnetic North  Pole. Its purpose is to promote world peace by becoming a  beacon for healing energies sent by people from all over the  world. Over 5000 pictures of the WPCG have been given out  to those who have requested them so they can send distant Reiki to the grid through the picture. The grid is also a relay station for higher beings so they can charge it with healing making it easier for them to help the earth as well.

Please see the article describing my experience placing the grid at the North Pole and more details on how it works.

I am now in the middle of a journey to Antarctica to place a duplicate WPCG at the South Pole. This will balance the process by having one peace grid at each end of the Earth. Along the way to Antarctica, I am stopping in Brazil to visit Reiki people and give a talk on Karuna Reiki®.

In Brazil, I also attended special sessions with Joao de Deus (John of God), a well-known Brazilian healer who's healing center is about two hours drive west of Brasilia in Abadiana, a small village. He is a trance medium who allows higher beings to enter his body to do healing through him. In addition to the spiritual beings that work through his body, many other spiritual beings work with him outside his body to heal all those who come seeking help. His spiritual orientation is that of a Christian mystic. 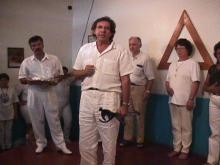 People travel from all over Brazil and other parts of the world to receive healing from him. His healing work has been scientifically researched and proven valid many times. He is also very open to documentation and allows anyone to photograph or video tape his work. There have been many miraculous healings, the blind see, the lame walk and every kind of illness has been helped or completely healed. What is more impressive is that he works with up to 2000 people in one day! He does this by spending only about 10 to 30 seconds with each person, then having them sit in meditation in one of three meditation rooms where spirit healers complete the healing work. His healing center is located over a large quartz crystal deposit which adds to the healing power and there are also rooms with 20-30 healers who sit in meditation sending healing energy to the process. He charges no money and pays for his work from donations which are not solicited and from his own income as a farmer.

He does two kinds of healing. Visible surgery and invisible surgery. He insists that both kinds work equally well, but does the visible surgery for those who need physical proof. The visible surgery is impressive. After saying prayers, he allows the healing entity to enter his body. He will then often use a scalpel to make a small incision somewhere on the patient's body. He will usually place a finger within the incision to remove negative psychic energy. He is in trance when he does his work and remembers nothing about what happened—which is one reason he allows his work to be videotaped—so he can see what has happened. He does not sterilize his instruments nor does he wash or sterilize his hands, yet the patients do not get infections and the wounds heal quickly. Neither do they feel any pain, even though no pain medicine is given. The patients are standing with their eyes closed and appear to be in a trance, which is said to be induced by the spirit healers. After visible surgery, the patients are carried away in chairs to the meditation room where their healing process continues through the healers in spirit.

With the invisible healing, people stand in line to ask questions or express their need for healing. After talking to Joao de Deus, who is in trance, they are asked to sit in meditation while the healers in spirit work on them. I received invisible healing and can report that it is powerful. I was in an altered state for several hours. There is a high spiritual presence that enters him and that is also present in the room while people are meditating. My experience here was very moving. The fact that he charges no money and works such long hours is an indication of his dedication. The positive results speak for themselves. 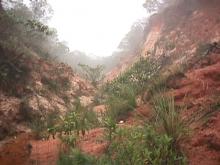 After seeing Joao de Deus, we went to Alto Paraisio. The name means "high paradise." The name is appropriate and as you read on, you will see why. Alto Paraisio is located about two hours drive North of Brasilia and is at an altitude of 1400 meters. As we got close to the area, I noticed a definite shift in the energy. I experienced an open, clear and light feeling that was very healthy and felt great! The reason for this became obvious. In addition to being far from any cities and at a high altitude, Alto Paraisio is located in the middle of what must be one of the largest quartz crystal deposits in the world! 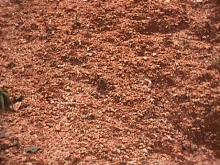 There are many crystal mines here and quartz crystals are everywhere. This became apparent when we went a few miles out of town to visit a crystal mine. The mine is actually a small canyon with a stream flowing through it. On the sides of the canyon and within the stream itself are quartz gravel, and if you look closely, you can pick out fully formed quartz crystals, some completely clear. In less than an hour, I had found about two dozen. Moisture from the stream seems to push them up from underground so there is always a fresh supply. Surprisingly, we were the only people there.

This is a new age community with many healers, clairvoyants  and mystics and about 100 Reiki masters. Many of the houses have large crystals at the apex. At the Osho meditation dome I was amazed to find that they actually use them in the path like gravel. I was told that they probably just raked them  up from the surrounding area to form the pathway which was a mixture of regular gravel and crystals. I was astounded! And  yes, they have several crystal stores in town with many  interesting pieces and very good prices. 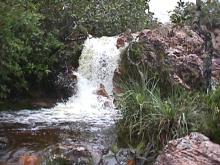 If this isn't enough to qualify Alto Paraisio as a paradise, the terrain is mountainous, and contains hundreds of waterfalls, some over 600 feet high! We went to several and at one we went swimming. The water was clear and pure and it felt wonderful. As we swam toward the waterfall, David, our local guide pointed out crystals embedded in the rock above a water filled cave. I read in a local magazine that because there are so few people in the area, the water in most of these streams is pure enough to drink! 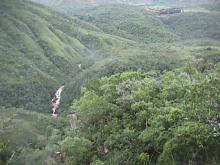 The Valley Near Alto Paraisio

Alto Paraisio is truly one of the most wonderful power spots I have ever visited. The weather is good year round, but the best time of year is in July and August when it is always sunny and the temperature is in the 70's. This is when I plan to return next year to teach a couple of Reiki classes and to explore more of the crystal caves and waterfalls. 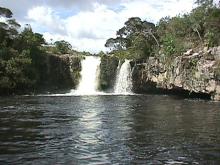 I wrote this story in hotel rooms and on airplanes as it unfolded. I am now in a plane flying to Punta Arenas which is at the Southernmost tip of Chile. As I look out the window, the sun has set and the sky is an intensely beautiful orange near the horizon and gradually feathers into yellow, green, blue and dark blue black. In a day or so, if the weather holds I will be on a C-130 flying to Antarctica to place the WPCG. I will be there living in a tent, meditating for world peace for two weeks. I'll be taking lots of pictures and video and this story will be featured in the next hard copy issue of the Reiki News. I love all of you and wish you all a joy filled holiday season.

May peace prevail on Earth.