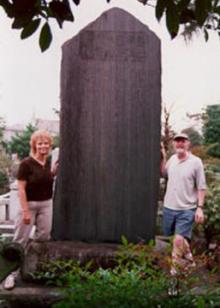 The Usui memorial is located at the Saihoji temple in the Suginami district of Tokyo. It was erected by Usui Sensei's students shortly after his death. It is maintained by the Usui Shiki Reiki Ryoho, the organization started by Usui Sensei. The memorial stone is about 10 feet tall and 4 feet wide. The inscription on the Usui Memorial was written in old Japanese by Mr. Okata, a member of the Usui Shiki Reiki Ryoho and Mr. Ushida, who became president after Usui Senseiâs passing. The English translation of the inscription is reprinted here from Reiki Fire with permission from the author Frank Arjava Petter.

The large kanji at the top of the memorial reads: "Memorial of Usui Sensei's virtue." The remainder of the inscription reads as follows:

Someone who studies hard (i.e. practices meditation) and works assiduously to improve body and mind for the sake of becoming a better person is called "a man of great spirit." People who use that great spirit for a social purpose, that is, to teach the right way to many people and do collective good, are called "teachers." Dr. Usui was one such teacher. He taught the Reiki of the universe (universal energy). Countless people asked him to teach them the great way of Reiki and to heal them.

Dr. Usui was born in the first year of the Keio period, called Keio Gunnen, on August 15th (1865). His first name was Mikao and his other name is pronounced either Gyoho (or Kyoho). He was born in the village of Yago in the Yamagata district of Gifu prefecture. His ancestor's name is Tsunetane Chiba. His father's name was Uzaemon. His mother's family name was Kaweai. From what is known, he was a talented and hard working student. As an adult he traveled to several Western countries and China to study, worked arduously, but did at point run into some bad luck. However he didn't give up and trained himself arduously.

One day he went to Mount Kurama on a 21 day retreat to fast and meditate. At the end of this period he suddenly felt the great Reiki energy at the top of his head, which led to the Reiki healing system. He first used Reiki on himself, then tried it on his family. Since it worked well for various ailments, he decided to share this knowledge with the public at large. He opened a clinic in Harajuku, Aoyama, Tokyo in April of the 11th year of the Taisho period (1922). He not only gave treatment to countless patients, some of whom had come from far and wide, but he also hosted workshops to spread his knowledge. In September of the twelfth year of the Taisho period (1923), the devastating Kanto earthquake shook Tokyo. Thousands were killed, injured, or became sick in its aftermath. Dr. Usui grieved for his people, but he also took Reiki to the devastated city and used its healing powers on the surviving victims. His clinic soon became too small to handle the throng of patients, so in February of the 14th year of the Taisho period (1925), he built a new one outside Tokyo in Nakano.

His fame spread quickly all over Japan, and invitations to distant many ailments. Once he went to Kure, another time to Hiroshima prefecture, then to Saga prefecture and Fukuyama. It was during his stay in Fukuyama that he was hit by a fatal stroke on March 9th, of the fifteenth year of the Taisho period (1926). He was 62 years of age.

Dr. Usui had a wife named Sadako; her maiden name was Suzuki. They had a son and a daughter. The son, Fuji Usui took over the family business after Dr. Usui's passing.

Dr. Usui was a very warm, simple and humble person. He was physically healthy and well-proportioned. He never showed off and always had a smile on his face; he was also very courageous in the face of adversity. He was, at the same time, a very cautious person. His talents were many. He liked to read, and his knowledge of medicine, psychology, fortune telling and theology of religions around the world was vast. This life long habit of studying and gathering information certainly helped pave the way to perceiving and understanding Reiki. Reiki not only heals diseases, but also amplifies innate abilities, balances the spirit, makes the body healthy, and thus helps achieve happiness. To teach this to others you should follow the five principles of the Meiji Emperor and contemplate them in your heart. They should be spoken daily, once in the morning and once in the evening. 1) Don't get angry today. 2) Don't worry today. 3) Be grateful today. 4) Work hard today (meditative practice). 5) Be kind to others today. The ultimate goal is to understand the ancient secret method for gaining happiness (Reiki) and thereby discover an all purpose cure for many ailments. If these principles are followed you will achieve the great tranquil mind of the ancient sages. To begin spreading the Reiki system, it is important to start from a place close to you (yourself), don't start from something distant such as philosophy or logic.

Sit still and in silence every morning and every evening with your hands folded in the "Ghasso" or "Namaste". Follow the great principles, and be clean and quiet. Work on your heart and do things from the quiet space inside of you. Anyone can access Reiki, because it begins within yourself!

Philosophical paradigms are changing the world. If Reiki can be spread throughout the world it will touch the human heart and the morals of society. It will be helpful for many people, not only healing disease, but the Earth as a whole. Over 2000 people learned Reiki from Dr. Usui. Even more learned from his senior disciples who carried Reiki further. Now after Dr. Usui's passing, Reiki will continue to spread far and wide. It is a universal blessing to have received Reiki from Dr. Usui and to be able to pass it on to others. Many of Dr. Usui's students converged to build this memorial here at Saihoji Temple in the Toyotoma district. I was asked to write these words to help keep his great work alive. “I deeply appreciate his work and I would like to say to all of his disciples that I am honored to have been chosen for this task. May many understand what a great service Dr. Usui did to the world.”