The reproductive organs are an important area to treat. Yet, often go untreated because practitioners know it is inappropriate to touch the genitals and even treating with the hands in the air above is often considered inappropriate as well. However, there is a hand position that will effectively treat this area without inappropriately touching the genitals.

The reproductive area often holds unconscious shame and guilt. In many cultures and especially in the west, sexuality is outwardly stimulated by movies, music, advertising, magazines, clothing and so forth, but at the same time, we’re told by religious and moral “authorities” that sex is bad and we should be ashamed of our sexual thoughts and feelings as well as our sexual acts. Also, children are often told that the genital area is bad. They’re told not to touch it and that it is a nasty and forbidden area.

Yet, sexual energy can be very strong. All this results in strong feelings of shame and guilt that are stored in the reproductive area and ignored to the point that their existence is denied. This means that most people are unaware that these feelings are present.

The unhealed feelings of sexual assault and rape are also stored in this area and locked in place by the denial mechanism that was likely already present. Feelings of this nature are often filled with tremendous fear, anger, self loathing, low self esteem, distrust of others and great shame.

Because of the strong feelings of shame that develop in this area from a young age, it tends to become the shame and guilt storage area where non-sexual feeling of shame and guilt are also stored.

Even though most people are not aware of these feelings, they continue to exist and will have a significant affect on the functioning not only of sexuality and the reproductive processes including sexual function and fertility, but also can affect other areas of the body, the personality and ones spiritual life as well.

Takata sensei felt that the reproductive area was where the cause of breast cancer is located in many women and mentioned at least one breast cancer healing that took place by using this position. 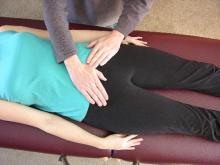