Reiki In An Indian Prison

Reiki In An Indian Prison

While in India, I had the great pleasure of teaching Reiki to prison inmates. This was at the Tihar prison in New Delhi, which, with 11,000 inmates is the largest prison in India. 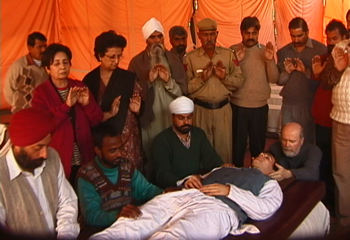 The class was composed of 60 students that included inmates, guards and some of the doctors. The inmates had committed a wide range of offenses including some with serious crimes including murder and several who had been given life sentences. I found the attitude and energy of the class much different that what I had expected. They were all very open, friendly and enthusiastic.  I found it easy to talk to them and they were eager to learn. I can only think that it must have been the Reiki and perhaps the fact that those who wanted to learn Reiki were naturally mellower than the rest of the prison population.

We taught Reiki One and included the theory of how Reiki works, the history and answered questions.  Some wanted to know the relationship of Reiki to the chakras and how it relates to Hindu spiritual methods.  A discussion developed that included the chief of police and some of the inmates as to whether Indian Holy Scriptures like the Bagahvad Gita included descriptions of Reiki like practices.  There were 4 of my student teachers present and we divided up the group for the attunement.  Then we taught them the hand positions and we spent several hours practicing on each other and with self-treatments.  We also taught them how to beam Reiki.

At our second visit two days later, a special conference was held in which the warden of the prison, the New Delhi chief of police and other prison officials were present as well as member of the media and the students.

When talking about using Reiki to achieve goals, one inmate jokingly asked if Reiki could help him breakout -- and we all laughed. Then I described how to use it to get a parole or to get pardoned, but let them know that this would only happen if it were part of God's plan for their lives. I explained the value of using Reiki to develop new skills and expressed the importance of creating a healthy happy life once they are released and how to use Reiki with visualization to do this. I also explained how to use Reiki to clear negative energy from ones aura and from a room or from their cell. They really seemed to like this idea. I also explained Gyoshi-ho or how to send Reiki with the eyes.

I enjoyed teaching Reiki there as did my students and plan to go back when I return to India next year. In the mean time, members of the Reiki Centers in Noida and Delhi plan to continue to go back and work with the inmates, guiding practice sessions and continuing to teach. Our goal is that eventually, some of the prisoners will become Reiki teachers and set up a permanent Reiki training and practice area in the prison. We will also be sending Reiki manuals in Hindi for their library. Everyone was excited and we are very happy to have had the opportunity of teaching Reiki and giving treatments there.