Reiki in The Holy Land

Reiki in The Holy Land

Passing through Zion Gate, we entered the Holy City, and I began feeling a very high spiritual energy working on my solar plexus. A healing was taking place within me, and the energy was very bright and uplifting. Streams of subtle white and blue light were weaving around me, and a very potent and penetrating form of clear light seemed to be working on my solar plexus. After a few minutes, I experienced a joyous release and felt uplifted, as though spiritual energies were now animating my physical body. I felt buoyant, strong physically, and very uplifted spiritually. This process continued as we went from one shrine to another.

Amir, my sponsor, was having similar experiences and mentioned that perhaps this was because so many people focused their spiritual attention on this area, but I knew that something more than that this was taking place. This was the highest and most powerful spiritual experience I had ever had, and while large numbers of people focusing on one spot could produce strong healing energies, it didn't seem to me that this would create the purity and the very high levels of consciousness I was experiencing. My inner impression was that the high spiritual energies were coming to us through the direction of one or more of the enlightened beings or angels whose energies and consciousness were grounded in the spiritual sites of the Holy City.

Old Jerusalem
Surprisingly small, yet containing a labyrinth of over a hundred streets and a thousand shops, Old Jerusalem is a walled city about one square kilometer or six city blocks in size. The current wall surrounding the city was built by the Ottoman Turks in 1537 and has seven gates. The holiest shrines within the old city are:

Dome of the Rock
The Dome of the Rock, an Islamic shrine that contains the rock which the prophet Muhammad stood on before ascending into heaven. This same rock is said to be the one Abraham almost used to sacrifice his son Isaac before God told him he could offer a goat instead. The Al-Aqsa Mosque is part of this complex. This is considered to be the third most sacred site in Islam. 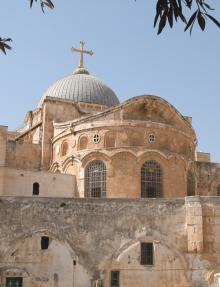 The Western Wall, also called the Wailing Wall, built by Herod in 20 B.C. as part of the second temple. The first temple, built at the same location, was Solomon's temple, which housed the Ark of the Covenant and was destroyed by the Babylonians. The second temple was destroyed by the Romans, leaving only the Western Wall. This is the most sacred site in Judaism, and it is said that the gate to heaven is located above it. Jews come to pray at the wall and often place written prayers into the cracks between the stones; the Wailing Wall is open to anyone who wants to come and pray.

Jerusalem, a spiritual center for at least 3,000 years, was founded by Kind David in 1004 B.C. Because it is a holy city for Judaism, Christianity, and Islam, it is directly or indirectly a focal point for the prayers and spiritual energies of over a billion people. It has also been the cause of great conflict between these religious groups, who have fought each other over control of this sacred city. Because of this, Jerusalem has likely been the location of more suffering and bloodshed than any other city on earth. This is a paradox. How can a city that is filled with so much spiritual power also be the cause of so much suffering? This is a puzzle I continued to ponder during my visit to Israel.

Bethlehem
Bethlehem is about five miles from Jerusalem and is the location of the Church of the Nativity. This church is built over a grotto said to be the place where Jesus was born. The grotto contains a shrine with a star on the floor representing the exact location of his birth. Off to the side and down a few steps is another shrine indicating the location of the manger in which Jesus had been placed after his birth.

This is just part of the article which appeared in the Winter 2003 issue of Reiki News Magazine.