Reiki and the Adventure of My Life

Reiki and the Adventure of My Life 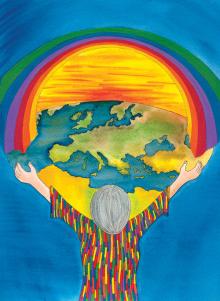 My doctors told me that by the time I was forty, I would be totally paralyzed and in a wheelchair. I had an inherited spinal defect similar to spinal bifida in which my spinal cord had become exposed and was being pinched to the point that major nerves were being compressed. The doctors said the damage was too great to repair. I had problems standing, walking, sitting, and getting out of bed. I had lost feeling in my left side, including my arm, and had started dragging my left leg. This affected my emotions too, and the thought of having to be taken care of for the rest of my life left me feeling suicidal.

Soon after receiving this devastating revelation from my doctors, I encountered Reiki when a friend of a friend hugged me during a chance meeting in a bookstore. I could feel her hands on me hours later, especially on my back where I had the spinal problem. Because of this experience, I decided to take a Reiki course, as I felt it might help my condition. After the course I started giving myself treatments and experienced a return to harmony on all levels. I felt I had touched my soul, and I found a deep peace.

For years prior to my discovery of Reiki, I had had the feeling that a dark cloud hung over my head and that I was jinxed in some way. Now the cloud had disappeared, and it was as if I had awakened from a long sleep. One of the most amazing realizations for me during this time was that, because of the peacefulness I felt, it did not matter if I would be in a wheel chair. I had surrendered all demand and that was when my physical symptoms began to disappear. I continued my work as a financial advisor and did Reiki in the evenings. I lived in two worlds; one I considered “normal” dressed in corporate drag, and the other, well it was Reiki, and I slipped into something more comfortable. I did not mix the two. It was like having my feet in two different boats, and I had to maintain balance to keep afloat. I decided to become a Reiki Master because I wanted to be able to teach others, so that they could experience the peace and fulfillment that I knew Reiki could bring. I completed Master level training in July, 1988 and taught my first Reiki I class in October, 1988.

I had been using regression work with my Reiki practice and in 1989 decided to travel to Somerset, England to study regression techniques. A few days before my departure I went to visit a friend at her office. A woman sitting in the waiting room looked at me and said, “Soon you will go on a long journey. You will cross the big ocean and will not return to the United States for a long time. Take everything you need, especially warm clothes. You are going to wake the sleeping people of many churches.” I remember thinking the woman was very strange and that I had absolutely no intention of working in a church. Besides it was my plan to return in three months or less.

Despite my "plan," I had been in England only two months when I made the decision to stay and to put both of my feet in one boat. “The Reiki Boat” was now my vehicle of choice. My family was shocked because I had always felt that I had to have a steady paid job, and here I was leaving everything and following my heart. They did not understand me and were worried about what was going to happen, while I on the other hand, was happy responding to spirit.

I was one of the first Usui Reiki Masters in the UK, and I was invited by many people to travel and facilitate courses all over Britain. After working in England for some time I was asked to come and work in Scotland with a group of doctors who were interested in the influence of Reiki by clinical application for depression and motor-neurogical defects. It was an exciting time with a tremendous amount of work and research going on, but I was still missing something. One morning I was compelled to pray. I got down on my knees and asked to be told where to go to be of greater service to mankind. In less than ten minutes I had received a telephone call and was told to go to Czechoslovakia. I remember looking up to the ceiling and saying “ Gosh God, that was fast!”

I followed my heart and arrived in Prague on February 3, 1991, after spending Christmas and my 44 th birthday with my spiritual family in the Netherlands. The weather was much colder than I had ever experienced. On my first day in Prague the temperature was at an all-time low of –38 Celsius (-36.4 Fahrenheit). Even the Voltiva River was frozen. Fortunately for me, a friend in Holland had given me an old coat and a pair of winter boots.

As a way to live, I started teaching English in a local hospital and at the high school in Kolín, 50-kilometers to the east from Prague. I planned to stay only three months. When I arrived, the people were newly free from communism and had no idea about basic ways to support themselves in a healthy life style. They had never been able to experience energy medicine or many other things that I had taken for granted. I had 50 dollars to my name, two suitcases, and my willingness to make a difference in whatever way I could. I was housed in student housing for medical personnel. There were 17 of us on one floor sharing one toilet and one tub. My one-room accommodation contained a few old cabinets, a single bed, and a broken refrigerator. I was told to put my food on the windowsill, where it promptly froze. Everything I thought I had needed to feel safe and comfortable had been left behind. I remember thinking this is all about faith and trust.

I tell people that God had a great sense of humor about my stay in Czech. He surely knew that I would have said after a few weeks, “Look I tried, it isn’t working, and I will leave now,” but I couldn’t leave because I did not have enough money to go anywhere, much less out of the country. I had to make it. I surrendered my fear and placed my trust in God. Some Ethiopian doctors on my floor saw to it that I had food for the first two months because it took that long for me to be paid my 30 dollars a month salary. After some time, my English students, who were also the heads of the various departments in the hospital, asked me what I really did when I wasn't teaching English, and I told them about Reiki. They asked me to work with several of their patients so that they could monitor the effects of Reiki. I started treating with Reiki in a ward of 50 patients who were suffering from staff infection and septicemia and were not expected to live. If Reiki did not work it would be okay, and if it did work, well the patient would be considered lucky. They were quite surprised when patients started getting well...

This is just part of the article which appeared in the Summer 2006 issue of  Reiki News Magazine.