While on Maui last May, I had the good fortune to attend a Horse Whisperer training lead by Franklin Levinson. Many of his methods are based on those used in the movie of the same name starring Robert Redford.

According to Franklin, there are two ways we can interact with a horse. One is through force (i.e., fear-based control); the other, to lead it through trust, respect, knowledge, and mutual agreement (i.e., love). The first way produces a slave, a being whose actions are motivated by fear of punishment, a captive. The other way produces a willing partner, a loyal and trusted friend, and a relationship built on respect.

Franklin teaches students how to communicate and interact with horses on a primal level, to connect directly with a horse's psyche and instincts. Horses are amazingly sensitive, intelligent, and aware. Being herd animals, they have a highly developed ability to understand and respond to body language and to look for and respond to a leader. (We also found they are amazingly telepathic and are healers.) With this understanding, it's possible to get horses to do whatever you want them to do-within reason-if you first gain their trust and show them you are worthy of being their leader.

We were shown several body movements and postures horses use to communicate various feelings and ideas. For example, if a horse likes you, it will show affection by placing its head on your chest. If it likes what you're doing and is receptive to it, it will lower its head and blow through its lips. We were shown how to become friends by focusing on feelings of peace and love-which the horse can feel-and by petting and scratching the horse. Once trust is formed, the horse will want to be near you; so if you begin walking around the corral, the horse will follow. Doing this establishes you as the leader. Then by using a wand and standing in the center of the corral and simply holding it up off to your side, the horse will begin running around the outside of the corral. If you lower the wand, the horse will stop and walk back to you.

One of the horses we worked with was named Dukie. We were able to get him to jump over a short barrier as he ran around the corral. We found that the clearer your expectation and the stronger your energy about this, the better rapport you had with the horse and the more responsive it would become. When doing this, I felt a definite feeling of partnership and shared love, that Dukie was doing what I wanted because he truly enjoyed doing so.

After each student interacted with the horse in this way, Franklin had us do something that produced an amazing result. When it was each person's turn, Franklin asked him or her to close their eyes and tell what was seen or felt. Many would start crying and say that the horse was healing some emotional wound they had from childhood or other experiences. 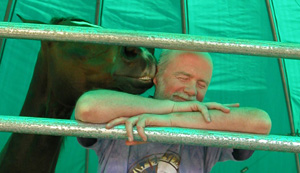 When it was my turn, I began doing Reiki on Dukie, and he immediately took on a different posture, which Franklin noticed. He placed his head down in a receptive posture, and Franklin said the horse really liked what I was doing. Then, after this, he asked me to place my arms on the corral bar and not pay any attention to Dukie. When I did this, Dukie came up behind me and began nuzzling me on the back around my heart in a very gentle and affectionate way. Then he began nibbling on my ear with his lips. This felt both unusual and wonderful.

Then I was asked to go inward and tell what I saw. Dukie began to place an image in my mind that was more than just an image. The horse was running through a field of grass, and the sun was shining a glorious, warm golden light. The horse was filled with a sense of being one with nature and filled with great joy-the joy of life and the joy of being free. Then I felt Dukie ask if I would like to join him, and as soon as I said yes, I was there with him, bathed in the energy and connected with all the forces of nature and feeling so free. This was very moving, and I feel that it was Dukie's way of thanking me for the Reiki I had shared with him.

Later, after we left and were on the beach watching windsurfers, Dukie came to me inwardly and again nuzzled the back of my heart. Then he began working with my solar plexus energy. There were some stuck negative feelings and energies there that I had been dealing with and working to heal, but hadn't been able to do so. I felt the blocks melting and releasing, and they were gone. This was another amazing experience and a real miracle.

I'm blessed to have spent this healing time with Dukie, merging with his consciousness and feeling what he feels: noble, mystical feelings of grace, strength, loyalty, emotional clarity, love, and a willingness to help. I learned so much about being a healer and the potential within all living beings.

Franklin Levinson can be contacted at (808) 572-6211 in Maui or through his website, www.wayofthehorse.org.

This is just part of the article which appeared in the Fall 2003 issue of Reiki News Magazine.