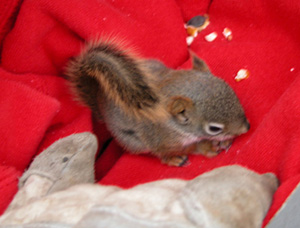 This is Homer. He was only 2"
long when he found me.

While doing some yard work in front of my house, I noticed a very small baby squirrel on the drive way. I looked closely at him, but he didn't run away which seemed strange. So, wanting to gain a rapport with him, I got down on all fours and slowly moved around him, letting him know I was a friend. He continued to remain in the same spot, but I could tell he was trying to communicate with me. He seemed to almost be crying and it seemed like he was trying to tell me that something really bad had happened. Then I stood up and began sending him Reiki. He immediately ran over to my foot. As I reached down he jumped right into my gloved hand. As I brought him up, he still seemed really scared, but calmed down as I gave him more Reiki.

I would have liked to take care of him, but because I travel so much I knew I wouldn't be able to. So, I went next door to my neighbors who have two children and showed them the baby squirrel. They were excited and their mother came out and said that she had seen a mother squirrel in the road that had been killed by a car just yesterday. So we thought that perhaps this had been the mother of this baby and that's what the little squirrel had been trying to tell me. That it needed help - some one to take care of it because it's just a little baby and its mother had been killed. So we got a box and placed him in it which seemed to make him feel happy - like he knew we were going to help him.

The two neighbor children took care of the baby squirrel and made a small hole in the screen door so it could go outside. The baby squirrel would go out and come back and would often play with the chipmunks in front of the house. He stayed out longer and longer until finally he didn't come back, but could be seen from time to time playing in the front yard and climbing in the trees.