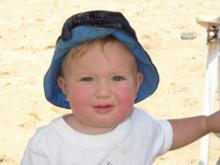 Dylan
On January 22nd, 2004, my eighteen-month-old son Dylan was diagnosed with a brain stem glioma, an inoperable brain tumor whose prognosis is dismal. After noticing my son's right eye turning inward, we took Dylan to see a pediatric neuroophthalmologist at Children's Hospital of Philadelphia. After examining Dylan, the doctor ordered an MRI to be done the same day. At around 6:30 p.m., we got the worst news of our life. The results of the MRI showed that Dylan had a diffuse intrinsic pontine glioma. Because of the tumor's location, surgery was not an option. With the conventional treatment available (radiation and chemotherapy), the doctors still only suggested an average life expectancy of nine to fifteen more months; with no treatment, two months. We had gone to Philly for an eye exam and were sent home with hospice instead.

Dylan's grandfather suggested developing a Web site with his story in hopes of obtaining any information on what else could be done to save our son. The Web site would also be a vehicle to ask for prayers for Dylan and share our journey with others. The outreach from others was truly amazing, and this is how we were able to develop a comprehensive, holistic treatment plan for our son. The alternative community showed us a completely different perspective enveloped in hope, healing, and the belief that the only prognosis that can be made is from the Divine Higher Power.

The tumor was so aggressive that we opted to do the radiation in order to buy some time for the alternative therapies to work. We were advised to do six weeks of radiation as well as chemotherapy; however, we only completed five weeks of radiation. This is the only conventional treatment that Dylan received. The rest of Dylan's treatment plan consisted of a number of different supplements and enzymes, chiropractic care, an organic diet, visits to several healers, and lots and lots of Reiki and prayer.

Seeing the profound benefits of energy work I decided to go for Reiki classes myself. I was attuned to Reiki I in September 2004 and have not missed one day of channeling to my son. In April 2005 I completed the Reiki Master class with William Rand, with the International Center for Reiki Training, and I continue to pursue my studies in energy medicine.

We stumbled upon an alternative test that gives indicators of cancer levels, total body toxicity, radiation levels, and organ functions. I will be up front and state that the test is controversial even among alternative healthcare practitioners. However, after using the test a few times and speaking with some others who are utilizing it, we have come to trust its accuracy. When we first tested Dylan back in November, his numbers were not very good. They weren't completely terrible either, given the situation, and so it established a pretty good benchmark for us. Over the course of the next few months we tested Dylan two more times and his numbers were improving, albeit in small increments, but at least we were moving in the right direction. Two weeks ago we did our fourth test, and the naturopath we have been working with reported that Dylan's test results were perfect—no signs of cancer activity, no toxicity, no residual radiation, and his organ functions (liver, kidney, and pancreas) were back to normal. Dylan is currently symptom-free, and it has been eighteen months since his diagnosis. He celebrated his third birthday on July 30th.

We have chronicled our journey and the treatments we have employed on Dylan's Web site to document his progress, be an informational source to others battling disease, and to hopefully bring about some level of awareness, hope, and faith for those who wish to read his story. Dylan has already touched so many hearts and has connected people all around the world. He has reminded all of us of the power of community, the kindness and good in people, and the strength of the human spirit. We know so little about how our bodies can heal and mother earth's medicine. We are bewildered by the power of positive energy and prayer and the existence of miracles. We don't have all the answers, so don't accept a definitive prognosis. Life is a mystery, and this is why we can never give up hope. This is Dylan's message to all afflicted by illness and despair. You are not alone, you need to be in control of your healthcare, and you should make the decisions that you feel are best for you.

Thank you for your love, light, and prayers,

This is an article from the Fall 2005 issue of Reiki News Magazine.